Once Dan got the bug for the trailer,
he obsessively sat on the computer for at least a week straight, every hour,
almost no food, wouldn't even go for a walk.
Summer was starting to go downhill. 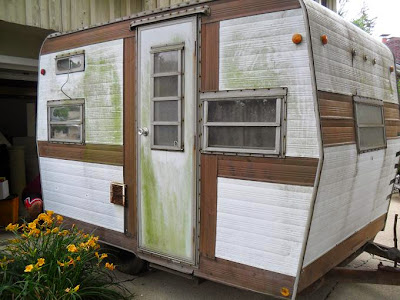 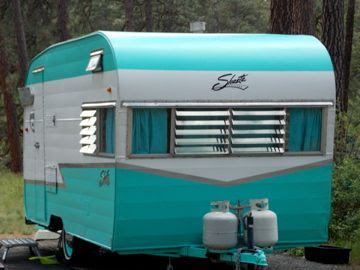 Because vintage campers have such a high cult following,
they can be extremely difficult to acquire.
Once they are posted on Craigslist, or other online listing services,
they are literally sold within minutes.

You have to sit on the computer in vigilante mode
ready for the very next posting as soon as it pops up.

They are sold for an easy $1500 or more, even in trashed condition.
We considered even driving out of state,
and he started searching in the tri-state area,
but those sales ended quickly, too. 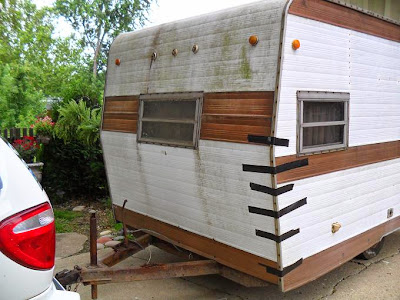 So, after several days of obsessive hunting,
I thought his eyes were going to pop out and roll away.

I was not going to stress about a camper.
I have stressed enough over real bull*^&),
this is child's play bull^(*$.

I suggested he pray and ask St. Anthony,
patron saint of lost and found articles,
for him to ask Jesus
to help him in finding a vintage camper. 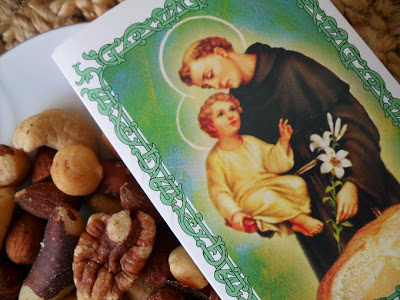 I handed him a holy card from the kitchen shelf. 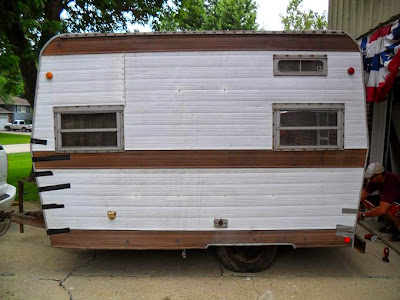 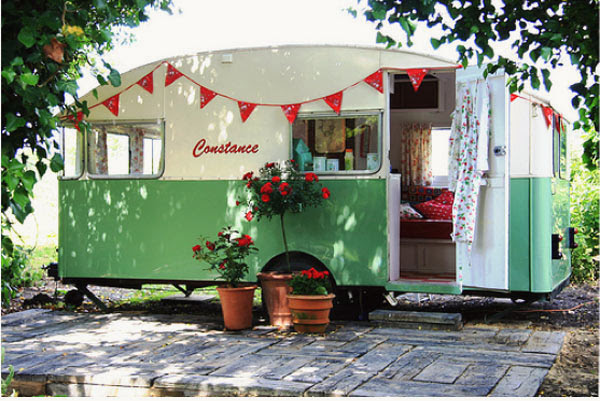 I think it was literally within the hour,
Dan not only found a vintage '72 Comanche camper,
but he found one just 15 minutes away,
for $300.
It needs a LOT of work,
but we knew it would.

Immediately inside the door of the camper was this: Blessings for a great weekend, friends!

Grandma Barb's This and That said...

What a great find! Love those vintage campers. I know you will have it in ship shape in no time.
Thanks for your comment on my country drives. You are welcome to ride along anytime. :)

HA! Funny description of a man-on-a-mission, online-style. My man is usually on eBay motors, searching for anything FORD that he may have driven in his youth. Kudos on the camper! Have fun!
Kay from redbirdv.wordpress.com

I am jealous, always dreaming of having one, and will!
I'm on Pinterest drooling all the time. Yours will be work but worth it. Have fun!

Way to go, she is a beauty.
Can't wait to see the transformation.
Thanks for sharing.
Michele

I always wondered how people could ever get one. He showed amazing dedication to the cause. Glad you can get to work on it now. Sounds like a lot of fun hard work.
Liz

Wow, meant to be for sure, Andrea! I finally saw one of these {with the curved top} on the road while we were traveling from Ohio to New York. I've seen lots of campers but usually they are those big ones hitched to pick-ups or just RV's. It was a really cute little one, too.

Oh what fun you are going to have decorating your vintage camper! Our oldest daughter bought one last year and they are camping with 2 children, 2 years old, and 6 months. I hope they get some sleep!

Congrats on your AWESOME deal!!! I know you two will make her a beauty queen for sure.

Your involvement was divine!

I shopped like your husband when looking for a pool table and ended up with a classic at a bargain price.

The camper project bug has bitten me as well, but I have yet to pray for guidance. :-)

You're so lucky to have found one (and what a fabulous deal too)! Having grown up during the tail end of the camper/trailer era, I wish more than anything that I had the one my parents owned.

Maybe some day hubby and I will find one of our very own.

I also got a camper last fall for 500.00 cannot wait to start my renovations this spring. I got a 69 scotty. Please keep sending updates 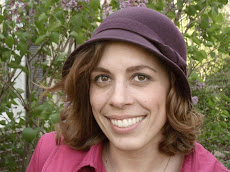 andrea@townandprairie
I am a life-long artist, an art teacher of painting, drawing, and sculpture, a wife and mother. My interests include the landscape itself, treasure hunting, art and art history. My motto is, "Your art is like your boyfriend- if you don't spend time with it, it's not going to work out." You'll find my husband Dan and I scouting the town for "prairie doves"... otherwise known as "ladies of the night" in the Wild Wild West. We often find them walking the streets or turned on their backsides with their drawers exposed,stripped of their hardware, and scarred with brandings and scribble tats, but we refine these ladies into true social gems. Come join us and the chickens for some cool picks as we freestyle out on the TOWN AND PRAIRIE...

Followers...All' the Chickens on the Prairie